On self-harm and a clinical example from my work 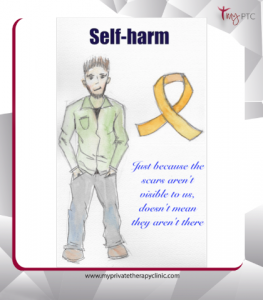 Self-Injury Awareness Day (SIAD) is on the 1st of March. This is part of an annual global campaign, during which there is a coordinated effort to spread awareness and understanding of self-harm and self-injury, both on the day itself and the weeks leading up to it. You can find out how to participate here: http://www.lifesigns.org.uk/siad/.

Individuals who self-harm cause intentional injuries to their body, with cutting, scratching, burning, bruising, and hitting oneself being just a few of the most common methods. Less obvious ways to self-harm might include alcohol and drug misuse, starving oneself or overeating, and excessive exercise. This behaviour is usually a way of expressing or coping with emotional distress, punishing oneself, or a cry for help. It may also be any combination of these. Although there is often a strong association between self-harm and an intention to die, self-harm behaviour can also present without such an intention.

In the UK alone, an estimated 400 in every 100,000 people self-harm. However, this figure is likely to be higher as many self-harm cases never become known. Anyone could potentially self-harm, but the majority of reported cases are seen in individuals between the age of 11 and 25.

People are often puzzled as to how is it possible for this behaviour to take place, and I am often asked about this condition in casual conversations – why would anyone want to harm his/herself? As strange as it might seem for many, this behaviour can serve a function and so there are comprehensible reasons as to why it occurs.

In most cases, people use self-harm as a coping mechanism to deal with overwhelming emotions. This might be caused by experiences such as bullying, difficulties with relationships (friends, family, work), sexuality issues, cultural pressures, sexual abuse, and bereavement, as well as suffering from certain mental health disorders, such as psychosis and borderline personality disorder.

To help explain how self-harm behaviour can arise, I’ll relate an example from my clinical work.

I once worked with a lady who had a history of various diverse mental health symptoms. During adolescence, she also engaged in self-harm. This was not behaviour that she had not been exposed to in her environment and she did not know anyone who was self-harming at the time. It was a behaviour that occurred spontaneously. One could argue that this presentation might have a strong genetic link, a hypothesis I did not take lightly. However, I wondered what purpose could the behaviour be serving at the time.

During history taking, I found that this lady’s parents were also experiencing mental health difficulties, and they found it difficult to manage their emotions, being quick to shut them down. As a consequence my client learned from a very young age that emotions are not well received if expressed within the family unit. It is likely that she was exposed to this since she was a baby. Such an environment can lead an individual to conclude that significant others are unreliable or erratically present, because they are likely to withdraw their support and connection if one appears “needy”.

By the time she reached adolescence, at time in which young people face all sorts of challenges, it appears that this lady had no one to help her diffuse emotions (frustration, stress, anger, sadness, disappointment, tension, and boredom), while also proving a safe and loving environment for her. She found that withdrawing herself from situations to self-harm was a way of releasing her distress and letting go. It was a way to “say” as much to a non-existent audience. She found relief in it. She found it cleansing. It was necessary to dissociate and numb oneself before returning to face the world again, stronger. Yet, these “rewards” were only short-lived and were quickly replaced by other significant psychological consequences such as feeling guilt, stress, and fear of being caught, as well as physical risks such as being permanently scarred and bleeding to death.

I came to the conclusion that in this case it was perhaps more likely that the self-harming behaviour was a combination of genetics and environment. When I began working with this lady for some other presenting difficulties, she had long ceased self-harming. However, she still had a remarkable lack of understanding of her own emotional states. For example, she was unaware when she was stressed or sad, which was key to understanding her more recent experiences. Therefore, her previous self-harm though no longer present later in life had served as a temporary solution that simply masked (unfortunately quite successfully) a more significant underlying issue, which over time developed into other mental health difficulties.

If you are self-harming, the way you think and what you feel play an important role. Perhaps you have not yet identified what triggers you to act this way. Even if you have, the fact that you continue to self-harm suggests that it may be driving decisions that might be limiting you: e.g., who you liaise with, how you have sex, what clothes to wear, etc. It likely impacts your day-to-day wellbeing, and most importantly increases the likelihood of you taking your own life, intentionally or not.

It is not an option to just suffer, which is what you have most likely doing for some time now. It may be tempting to continue doing so out of fear of judgement, embarrassment, or just perhaps because being alone is what turned out to be the “safest” option. Yet, reaching out has its advantages as long as you reach out to people who know how to listen and are able to understand the complexities behind this behaviour. These people can contain your feelings and your distressing experiences. Together, you can explore when this behaviour takes place, what function it serves, and whether there are alternative ways to diffuse or deal with a situation.

Dr Patapia Tzotzoli founded My Psychology Clinic where she gained her reputation working as Clinical Psychologist with clients on one to one basis in London and worldwide via online therapy. She specialises in adult mental health and couples therapy. Studied at the universities of East London, Oxford and Cambridge and trained at the Institute of Psychiatry where she worked across world-renowned NHS Trusts.

Click here to book an online session or in person with Dr Patapia Tzotzoli at My Psychology Clinic.